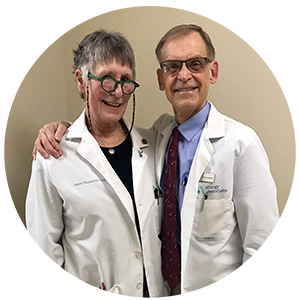 Dr. George Kroker and his nurse, Sorrel Wunderlin, are set to retire the first week of April.

ONALASKA, WI – For the past 38 years, patients with a host of allergy-related diseases have traveled to our community from around the country to have their lives changed. Dr. George Kroker has treated patients at Allergy Associates of La Crosse (AAOL) since its earlier days, and has provided an unparalleled level of care for his patients, so much so that many have left in tears after wishing Kroker into his retirement. Kroker and his nurse Sorrel Wunderlin are set to retire the first week of April.

After being trained under Theron Randolph — an innovator in the allergy world — Kroker connected with Dr. David Morris, founder of AAOL. The two had similar ideals: treat the cause of allergy related illnesses – rather than mask the symptoms — simply, safely, and effectively. Kroker moved to La Crosse from Chicago in 1981 to treat allergy with sublingual immunotherapy alongside Morris. He was the first full-time allergist to be hired to AAOL.

Jeff Kessler, practice executive at AAOL, says about Krokers’ start, “He was an innovator with special interests, just like Dr. David Morris was when he started the clinic. He was a great philosophical match and was successful in building his practice pretty much immediately.”

In his 38 years at the clinic, Kroker has, in the words of his patients, “saved” the lives of many with severe, complicated, and complex allergies and related conditions. Kessler explains, “He will bring in the most interesting cases, most interesting papers, and he acts as a detective putting the evidence and clues together to, in the end, really help these complex patients. He’s really gifted in that manner.”

Many patients have relayed their well wishes to Kroker over the past few months. One patient says, “Dr. Kroker saved my life. I was so sick and had been told it was in my head and referred to a psychiatrist. My first visit with Dr. Kroker changed everything. Daily migraines gone. Digestive and skin issues gone. He gave me my life back and I will always consider him a blessing.”

Kessler has heard these praises as well, along with patients hoping for ways to give back to someone who impacted them so profoundly. “I’ve had patients contact me about making contributions to research foundations on his behalf. It’s pretty amazing,” Kessler says. One patient made a quilt for Dr. Kroker. Others have taken photos with their humble doctor. Cards and gifts cover his modest office.

“When you’re a young doctor, you’re eager to make your mark. You’ve got all of these diplomas up on the wall. But over time you find how much more important it is to get that reward feeling from patients. We have been blessed to get a lot of cards and letters from patients, and they’re very gratifying to read,” Kroker states.

Throughout his time as an allergist, he has not only impacted patients directly, but has contributed to research on a variety of allergy related topics; he has had a particular interest in Candida-related illnesses and contributed a chapter on the subject in the textbook “Food Allergy” edited by Jonathan Brostoff.  In addition, he worked alongside other AAOL providers to author the La Crosse Method™ Protocol, a standard of sublingual immunotherapy that is used widely across the United States by thousands of providers.

As for retirement, Kroker will enjoy time travelling, relaxing, and continuing allergy research and education. He says, “I will rest initially for a month or so and get some sun and exercise. Then I hope to do some writing and some sort of service work. Here, I’d like to occasionally give a lecture to the doctors on an area that I think would be worthwhile for the group as a whole.”

Finally, Kroker states, “It’s bittersweet because every day you are saying goodbye. There’s a certain finality with it where you say ‘this is it.’ Beyond this, you’re not going to wear your white coat, you’re not going to get that patient time and enjoy the challenge of helping them. I have been blessed with the most wonderful, loyal, and thankful patients in the world.  No physician could ask for more. It will be hard to leave.”