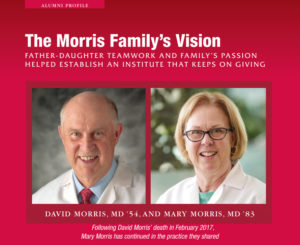 Published November 2017 in Quarterly, alumni magazine for of University of Wisconsin School of Medicine

As a young family physician who had recently returned from serving as a U.S. Air Force flight surgeon, David Morris, MD ’54, began his civilian career in a private practice in the southwestern Wisconsin town of West Salem. He often encountered patients with agriculture-related respiratory allergies, which would progress into wheezing and incapacitating fatigue.

Realizing the discomfort and inconvenience the illnesses caused for rural patients—at times of the year when farmers are busier than ever—piqued his interest in conducting allergy-related research. He learned of a treatment, more common in Europe than the United States, that entailed delivering miniscule amounts of antigens via drops under the tongue, the site of the body’s largest collection of dendritic cells, which are important messengers in the immune system. This technique, he posited, would stimulate the cells, causing them to down-regulate a patient’s allergy through the cervical lymph nodes. He believed that by working with the body’s natural immune system, patients would build a tolerance to the antigens. If successful, David Morris hoped, he could eliminate his patients’ debilitating symptoms.

By 1960, board certified in family practice (and later by the American Board of Allergy and Immunology), David Morris began to explore similar therapies for allergies to triggers like dust mites, molds and foods. A decade after his first successful treatment, he and his medical partners founded Allergy Associates of La Crosse, Wisconsin, where he had moved with his wife, Sacia Morris, and their growing family. There, the medical partners trademarked the La Crosse Method Protocol™, a sublingual immunotherapy treatment designed to help patients build tolerance to a growing list of environmental and food allergies. Read the full article about the Morris Family’s Vision »