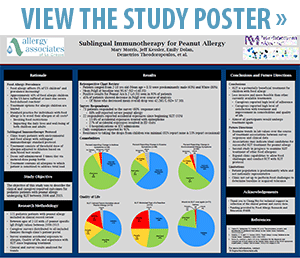 He found that patients with food allergies, as well as a myriad of inhalant allergens, also benefitted from what appeared to be a very safe and therapeutically effective route of antigen delivery.

Forty five years later, we have used our La Crosse Method™ Protocol to treat nearly 150,000 patients, many of whom have suffered with food allergy. That clinical experience has provided us with a wealth of data that my partners and I have studied to further refine our treatment. And recently, we’ve had the opportunity to work with a recognized food-allergy research team to study the impact of our treatment on pediatric patients with severe peanut allergy.

The study, which was presented as a poster at the November American College of Allergy, Asthma, and Immunology (ACAAI) meeting, reviewed 121 patients with peanut allergy who ranged from age 2-18. 93% of those patients showed positive results in Peanut Ara h 2 component tests, which studies have shown to be the best predictor for peanut allergy. We distributed caregiver surveys to examine accidental exposure to allergen, quality of life, and experience with SLIT since beginning treatment. We used those survey results (based on a 60% response rate), as well as clinical records, to analyze data and identify trends. 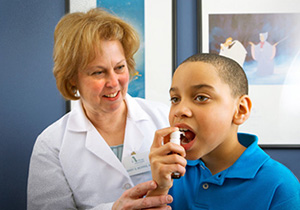 Through the survey data, we learned a number of things:

*It’s important to note that patients are routinely treated for both food and environmental allergies simultaneously.

Importantly, we looked at quality of life measures, as fear and anxiety are commonly found in peanut-allergic patients and their caregivers. We noted the following:

An important takeaway of the data, for me, is that parents reported an interest in and satisfaction for treatment that provided overall improvement for their children and relieved their own anxiety regarding accidental exposures. Often times, I talk with parents who are looking for reassurance that they don’t have to fear every time their child walks out of the door — a cure is a long-term hope, but it’s not necessarily the initial treatment goal. Accidental exposures for this study group appeared to be manageable without requiring hospitalization — which is very significant given the patients’ allergy severity.

We clearly have more to learn about food allergy treatment, key markers, and long-term benefit. It’s promising to see these initial findings and we will share more details upon publication. In the meantime, we continue to review data to further refine and expand options for a patient population that desperately seeks options.