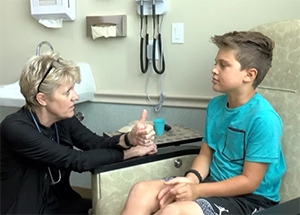 Over the past decade, severe food allergy cases have increased nearly 400% in the US, with over 15 million people suffering from a severe allergy to one or more foods. Years ago, avoidance was the only form of treatment, but now a different treatment is making a huge difference in one little boys life.

For 9 year old Max Jones, watching what he eats can be a matter of life or death. That’s something his mother found out when he was only 30 days old.

“He woke up covered in blood because he had scratched his face so bad,” said Kim Jones. “[Doctors] said we need to do testing and that’s when we found out.”

Max has a laundry list of allergies affecting his everyday life, both food and airborne. Some of those allergies like peanuts are extremely sensitive and dangerous.

“My mom went to this place and she forgot to ask about the peanuts in the sauce,” Max said. “So she had this chicken finger and she barely dipped it in and then ate it. She came home and kissed me on the cheek and I instantly broke out in hives.”

As part of his treatment and testing with Allergy Associates of La Crosse, on Thursday [9/1/17] Max enjoyed a cashew for the first time thanks to something called sublingual immunotherapy.

The idea of all immunotherapy is to gradually introduce small amounts of the allergen into the patients immune presenting systems so that they will be tolerated and eventually they will stop overreacting to them,” said Max’s doctor Demetrios Theodoropolous.

For the past three and a half years, Max has taken allergen drops three times a day under the tongue, building up his tolerance to his various allergies. Through periodic oral “food challenges”, doctors at Allergy Associates of La Crosse monitor his tolerance to certain foods in a controlled environment.

Now his list is shrinking, and his overall health is improving.

“We’ve seen a huge increase in him not getting so sick,” Kim said. “He would always get bronchitis and pneumonia and he would never just get a cold, it was always something more.”

It’s a long slow process but for max and his mother a worthy one to create peace of mind. Max is now able to have small amounts of eggs, milk, pine nuts and almonds, none of which he was able to before.

“I tell everybody about it and I recommend people — especially when they’re talking about their kids — to come here because we’ve seen really great results.”