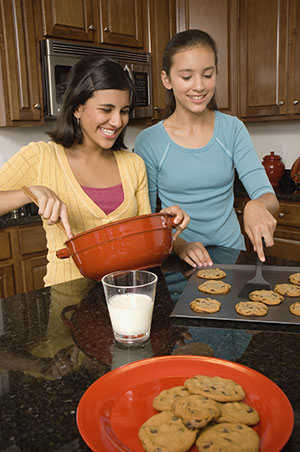 Eosinophilic esophagitis (e-o-sin-o-FILL-ik uh-sof-uh-JIE-tis) is the inflammation of the lower segment of the esophagus (the tube that connects the pharynx with the stomach). EoE can be painful and often manifests itself with stomach ache or symptoms that are usually attributed to GERD (heartburn, burping, vomiting), but can also manifest with symptoms from other systems:

It can also be associated with underlying conditions such as allergies. Accompanying allergic symptoms can include:

Eosinophilic esophagitis is characterized by infiltration by eosinophils, white blood cells, which are often found in allergic conditions. In more than half of pediatric cases of EoE, allergies are the major cause. When allergies are identified, treating them may dramatically improve or even resolve EoE. For this reason, we do skin and laboratory tests to identify environmental as well as food allergies in patients with EoE. Foods that are commonly found to be responsible may include milk, wheat, and corn, but other foods may also contribute to EoE.

Sublingual immunotherapy for EoE addresses both inhalant and food allergies and is especially suited for children because it’s safe and easy to take. Eosinophilic esophagitis in children is likely to be associated with co-morbid conditions such as asthma, nasal polyps and chronic sinusitis, which can be avoided with early diagnosis and treatment with immunotherapy.