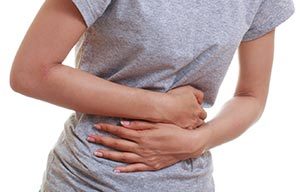 Irritable bowel syndrome (IBS) is a very common disease that affects 5-10% of the general population. Individuals are generally diagnosed with IBS after a number of tests – for ulcers, reflux, and structural issues – come back negative. At that point, sometimes an allergist is added to the equation, and then the relationship between IBS and allergy is recognized and can then be treated.

Studies show that 20-65% of IBS patients attribute their symptoms to an adverse food reaction, and those who experience atopic allergy symptoms are more than three times more likely to have IBS.

IBS can significantly alter ones life due to the lack of effective treatment options, and many people report missing school, work or family functions because of their symptoms. In fact, studies show that those who suffer from IBS miss on average 13.4 days of work each year.

There is a solution. As a way to increase the quality of life for those who have IBS due to allergy, sublingual immunotherapy may be used to help reduce or eliminate reactions. Once allergy testing is complete and allergies determined, treatment begins and works towards building allergic tolerance.